ARES celebrates a century of service to the community

It was a night of celebration and recognition Saturday as the community gathered to mark the 100th anniversary of Altona/Rhineland Emergency Services (ARES). The department brought back an old favourite, a fire fighter’s ball, to celebrate the occasion.

Leading up to the event, current member, Daryl Rempel, researched the history of the department, and he explains how it all started a century ago.

During Saturday’s ball, current and former members of the department were recognized, along with their families and employers. Former fire chiefs Bob Stoesz and Irv Braun also addressed the crowd.

Stoesz reflected further on how the department changed and grew during his time. He joined the fire department in May 1979 as a fire fighter and ambulance attendant.

“I served under Chief Ed Klassen during the first nine years on the department. And the first few years was spent learning basic firefighting skills from the experience of fellow members, and the training required to become an ambulance attendant was a basic First Aid course and CPR course. We’d have monthly training evenings once a month and another one evening a week for a department meeting,” reflected Stoesz. “Two meetings a month sounded quite doable at the time, but I learned very quickly that this time was only scratching the surface. In order to learn and to do a good job for the department in our community, it took a lot more time. But it was fun.”

Along with responding to about two dozen fire calls and fewer than 100 ambulance calls a year at the time, Stoesz said volunteering on the department also included many social opportunities with fellow members as well as other departments in the area. That’s when, he noted, the mutual aid concept first came to be.

“I found that being a member of the Altona Fire and Ambulance Department became a way of life. Yes, we carried the pager 24/7, so we could be called away from regular day-to-day life at any time. We enjoyed it, even though that meant a few changes in the family schedule at times.”

“Looking back, we know it took a lot of effort to serve the best we could, but we didn't let that stop us from trying,” added Stoesz.

Eventually, Stoesz went on to lead the department as Fire Chief, a time he says involved continuing the excellent systems that were put in place by previous Chiefs and volunteers.

“And I had two fantastic deputies to work with. One of them is Henry Loewen, rest his soul, and the other was Irv Braun. As well, many members of the fire department that are here today. Thank you. Everybody contributed in their own way for the general cause, and that was to provide a good service for our community.”

“My most enjoyable take away from being part of this group is all the friendships gained over the years. Keep doing what you're doing, it's working. And thank you.”

In the early 1990s, Stoesz said it became obvious that in order to do a good job, and to do a better job, the Chief role needed to become a permanent position in order to properly look after the members, training requirements, fire prevention and fire inspections in the community. After approaching partner councils a few times over the years with this proposal, Stoesz says they finally agreed. In 1997, Irv Braun was hired to fill the job, and Stoesz retired from the department.

In his address to the crowd on Saturday, Braun said the department has always been about council and community support.

“One thing that came to mind is a story that Ben K. Neufeld told me many, many years ago. He was telling me about the department responding to a fire. It was on Christmas Eve of all nights and I guess at that time, an awful lot of the churches were having Christmas Eve programs, and the firefighters all responded wearing their Sunday finest. Well, there were an awful lot of spoiled suits by the time the call was said and done. But that didn't stop the fire fighters from responding. Doesn't matter what it is, come heck or high water, when it's time to go, you go. That’s commitment.

So, Ben said this is a problem. We have to do something about it because the attire of the day was basically a raincoat and some floppy hat. It was basically no protection at all really. It kept the guys dry for like the first five minutes and that was it. Ben recognized the need and he went to Council and lobbied for better personal protective equipment (PPE) for the department members. That's leadership.

Council of the day reflected on his request and responded in-kind with starting to put out better PPE. That's when the long coats and the long boots and all that stuff...the shrink-wrap helmets. They weren't the greatest, but when they got hot enough, they’d wrap right around your head real nice and tight, but at least you're hearing is protected,” Braun said with a chuckle.

As for community support, Braun noted that ranges from local businesses allowing their employees to respond to calls, and most importantly, he added, support and commitment from families sitting at home.

“One thing I want to leave you with is, don't ever forget the most important rule of the Firehouse. Everybody comes home safe.”

Current and former members were recognized at Saturday's ball, along with members' employers and families. 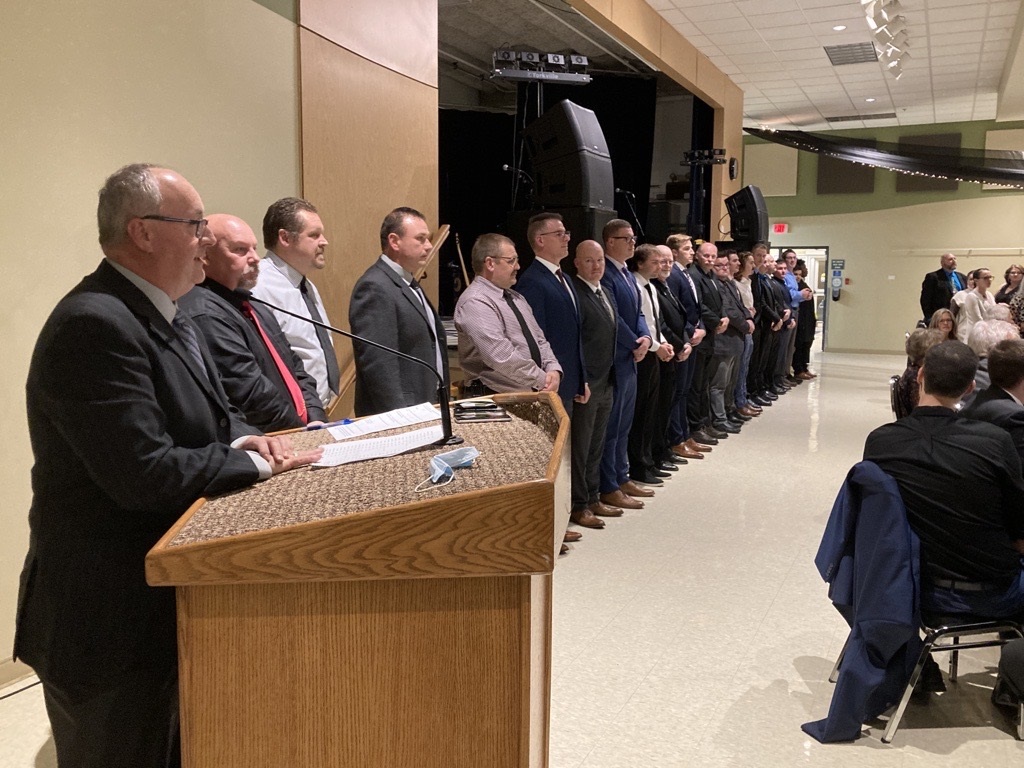 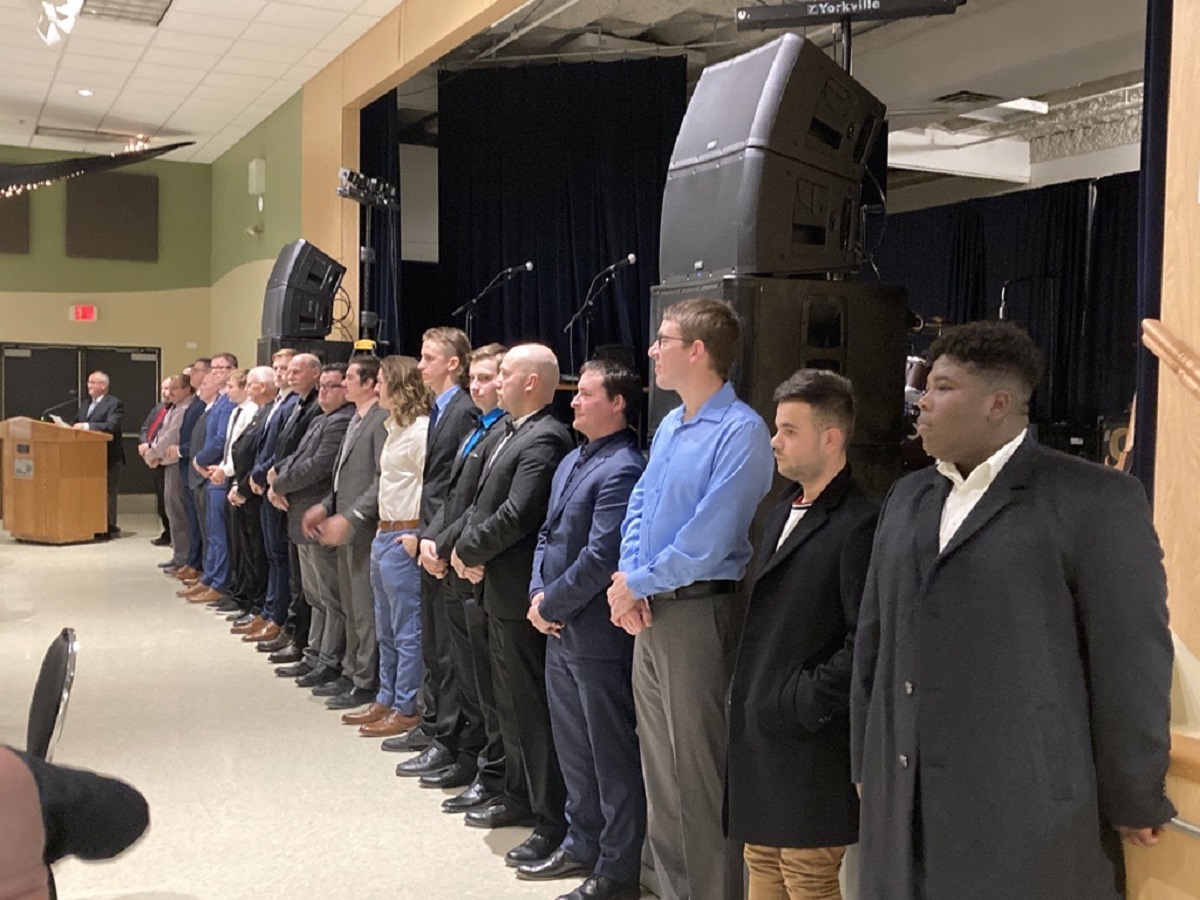 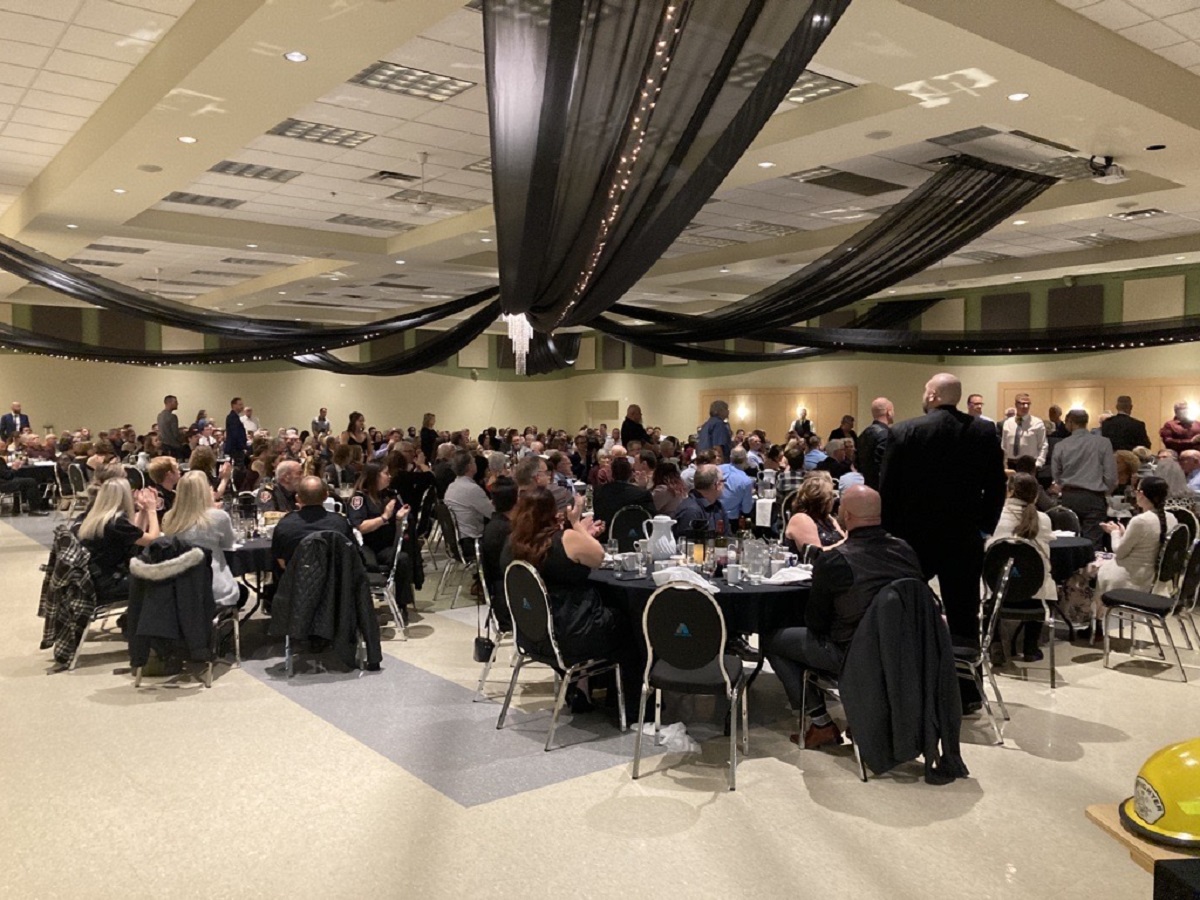 A new term ushers in new leadership around BLSD table