A crowd of concerned citizens gathered in and outside of the South Central Regional Library (SCRL) branch in Winkler last Thursday night at the board's monthly meeting, with a delegation of six people presenting its concerns based on a complaint made previously.

Spokesperson for the delegation, Karin Banman, is a mother of two school aged boys, and has served as an educator in the Pembina Valley for ten years.

"At the board meeting, we brought awareness to materials in our South Central Regional Library that include sexually explicit material that is accessible to our toddlers, children and youth. It all started because my friend's 6-year-old child pulled one of these books off the shelf of their local library. His mom was mortified, and went through the process of making a complaint."

According to follow up information provided by SCRL, the initial complaint was for the following books: "It's Perfectly Normal", "Sex is a Funny Word", and "What Makes A Baby." In a previous version of this story, PembinaValleyOnline incorrectly indicated the book "All Boys Aren't Blue" was part of the book complaint process, but according to SCRL that is not the case. However, the book was included in the presentation by the delegation last Thursday.  According to the library, "All Boys Aren't Blue", is available in eBook format and not in any of SCRL's branches.

Banman shared why it was important to make the presentation to the SCRL Board.

"We realized this was happening in more than just one community and more than just one library. We are concerned about our kids. We want to make sure they grow up in the healthiest environment possible, and we know that pornography harms children. These books are pornographic, according to the Criminal Code of Canada." questioning, "Why are our children under 16 years of age being counseled to perform sex acts? When it's illegal to perform a sex act under the age of 16, according to the Criminal Code of Canada."

She explained the request made to the board by the delegation.

"Our request to the board was these children's books, and any children’s book, or age of 0 to 17 books that contain pornography, teach sex acts, or could be used for grooming purposes are removed from all South Central Regional Libraries, and we are informed, in writing, how they will proceed with this process. In the spirit of transparency, our second request was they would provide, in writing within the next two weeks, the process by which books are chosen and made available to our children and youth, both in the libraries and in their online selection, and two, the process by which books are removed from the library. We want our libraries to be a safe place for our children."

After the meeting, SCRL issued a statement which included the following:

"SCRL has received book complaint forms, and these books will be reviewed by a number of persons and resources at their disposal. A delegation attended the September board meeting, and was extended the opportunity to make a presentation concerning these same books. The books under review have been made temporarily unavailable, so the book review committee could have full access during the review process."

The full statement can be found below by clicking the graphic. 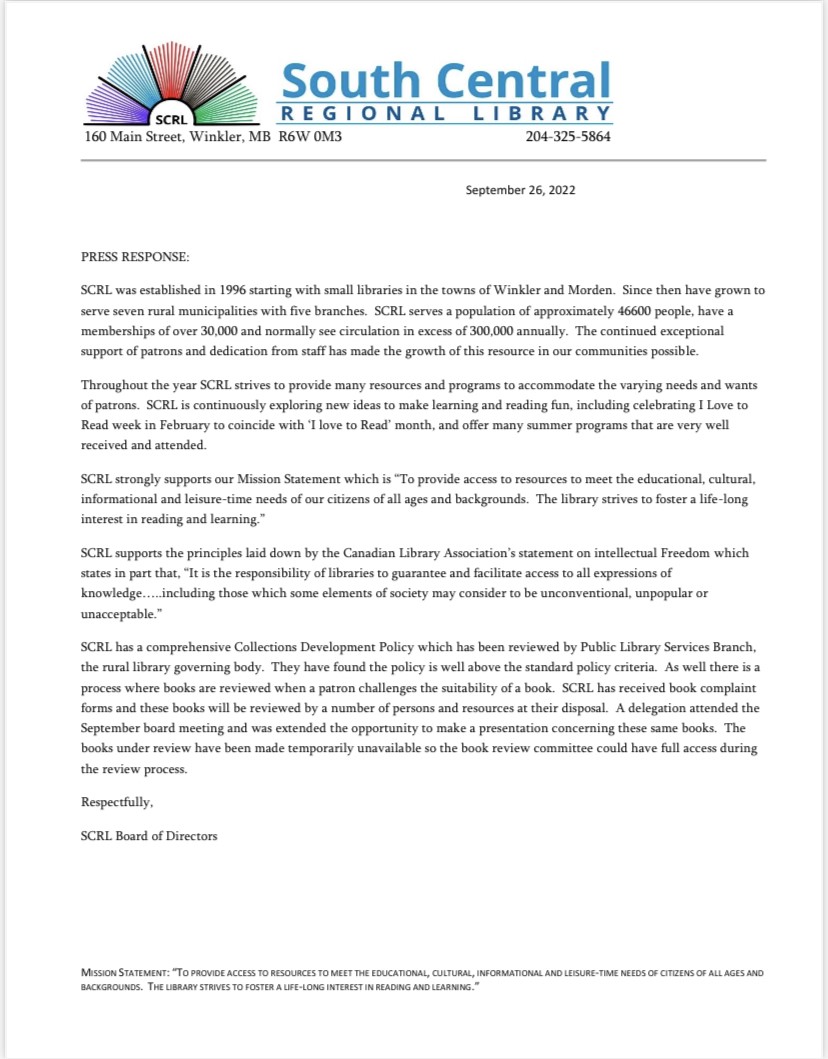